Pillars built between 268- 232 BC by King Ashoka has significant importance in the architectural history of India. These pillars are a series of columns dispersed throughout Northern India by King Ashoka during his reign in the 3rd century BCE.

“Dharma Thamba” or pillars of Dharma were first discovered in the 16th century and as of this date, 20 of these pillars still stand strong. One of the earliest stone sculptures, these pillars are 12-15 meters in height and weighs 50 tons.

Ashoka played a major role in spreading Buddhism by depicting the Buddhist edicts on his pillars which were constructed after he converted to Buddhism. He rejected violence and made sure his subjects were happy. The pillars spread throughout his empire and public officials at each pillar explained King Ashoka’s edicts.

They also gathered information about the empire. Aramaic and Greek languages were depicted on pillars located on the borders of the empire to declare that whoever was traveling this way has now entered the lands ruled by King Ashoka.

A few hypotheses state that Ashoka used the pillars to communicate his Buddhist messages. The idea of constructing a pillar probably came from the Persian artists who came to India in search of art and bringing with them the form of the pillar.

But it is also possible that Ashoka chose to construct the pillar since it was already an established Indian art form. The pillar represented axis Mundi (the axis on which the world spins) in both Hinduism as well as Buddhism. 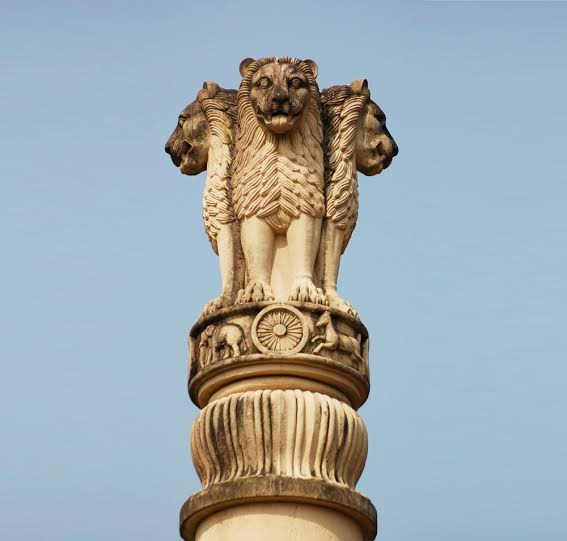 The two types of stones used in column construction were red and white sandstone from Mathura and buff-colored fine grain sandstone from Chunar, Varanasi. The pillars were constructed by craftsmen of the same region and the stones were carried from the place of extraction to the place where the pillars are found.

The four parts of the pillars were developed in such a way that three sections were made in a single piece to that of the monolithic shaft. The masterpieces of the Mauryan art are the crowing animals that are either shown seated or standing above the bell-shaped lotus petals. The seven animal sculptures that survive today are a part of the first important group of Indian stone sculptures.

The origin is traced back to lands like Persia and Greek as similarities have been found in the construction patterns of the columns’ capitals supporting the Persepolis and the Lion capital Of Ashoka.

Influence of Greek and Near–Eastern arts is also seen in the pillars as King Ashoka used bands of motifs, like the bead and reel pattern, the flame palmettes, lotuses which are likely to be originated from the Greek and Near-Eastern arts.

Scholars like Jhon Irwin states that the pillars symbolized Dhvaja or standard which the Indian soldiers carried during a battle. The soldiers believed destroying the Dhvaja of the enemy brought bad luck to their opponents. The Heliodorus pillar (Garudadhvaja), one of the earliest recorded stone pillars inspired King Ashoka to build pillars.

Brilliant architectural expertise was seen during the reign of King Ashoka were the city of Patliputra or the Barabar caves, the pillars and the Mauryan art. These are one of the most outstanding sculptures when compared with the world.

Sir John Marshall once said, “extraordinary precision and accuracy which characterizes all Mauryan works, and which has never, we venture to say, been surpassed even by the finest workmanship on Athenian buildings”.

The Lion Capital Of Ashoka located in Sarnath, Varanasi is the national emblem of India and symbolized the visit of King Ashoka to Sarnath. This 50m long pillar has four lions at the top along with dhamek stupa. The calm aura in the surrounding area has attracted monks for meditation.

There are four animals at the base of the Ashoka pillar, a bull, a lion, an elephant, and a horse with “Satyamev jayate” written below in Devanagari which symbolizes the four phases of Gautam Buddha’s life.

The Allahabad pillar built in the third century BCE is one of the few pillars that carry Ashoka’s edicts. The pillar also has inscriptions of the Gupta emperor Samudragupta and Mughal emperor Jahangir.

Later, the pillar was moved to Emperor Akbar’s Allahabad fort and is now captured by the Indian Army.

The Ashoka pillar at Sanchi was erected in the 3rd century and has a shaft and four lions. It is recognized as one of the most attractive destinations by the Madhya Pradesh government. One cannot get the complete sight of the pillar since the crown is kept in the museum.

The architecture of this pillar is inspired by the Grec-Buddhist style and has a lot of resemblance to the Ashoka pillar at Sarnath but the Sanchi pillar does not have the Dharmachakra, unlike the Sarnath pillar.

The Ashoka pillar at Vaishali was built by King Ashoka in the memory of Gautam Buddha’s last preaching that took place here. The lion at the top of the pillar facing towards the north direction is assumed to be the last voyage of Buddha. There are a brick stupa and a pond named Ramkund in the nearby area.

Lauriya gets its name from the pillar Laur built by Mauryan Emperor Ashoka and out of 40 pillars, only one remains. The 12m high pillar stands strong with the same glaze today and has inscriptions of six Ashokan edicts.

At the top of the pillar, there is a lion in a crouching position. This 24m high and 457m circumference pillar is a prime tourist destination and one of the biggest pillars in India.

The Lion Capital Of Ashoka is adopted as the national emblem of India and it recognizes the teachings of Gautam Buddha. The four lions stand for power, courage, and confidence and pride.

The country commits to uphold peace and tolerance by embracing the phrase “Satyamev Jayate” that states “truth alone triumphs.” It is also used as the official signatory by the government of India. The national emblem is a source of inspiration for all Indians and is a symbol of unity of the diversified culture of India.

What is the significance of Ashoka Pillars?

The edicts of King Ashoka on his pillars about the preachings of Buddha teach us Buddhist morals and values to lead a peaceful life. The motto on the National Emblem of India “Satyamev Jayate” makes every Indian remember that truth is the only way. One can find the national emblem on the currency, passport and many important documents.

Apart from ethics, these pillars have also become one of the best tourist destinations in India. People from all over the world come in huge numbers to take a glimpse of these marvelous pillars.

What do the four lions Symbolise?

The four lions of the national emblem stand for power, courage, and confidence and pride. The wheel is at the center of the abacus and a bull on the right representing hard work and steadfastness and a horse on the left representing loyalty, speed, and energy. The lotus below has been excluded.

The Ashoka pillars depict the age of the fierce and strong King Ashoka who later adopted teaching Buddha’s teachings to lead a non-violence way of life. The pillars were built in the 13th century but stand strong to date representing the firm construction. The intricately carved pictures of animals have made these pillars one of the most beautiful historical heritages.