Scientists state that deep thinking belongs to people with highly rated brains. Deep thinking encourages the thinker to question himself, thus coming up with new answers every time. Some people come up with hilarious questions and the funniest thoughts. But why does it happen? It’s because of dopamine, a chemical reaction in the brain, and affects your emotions. Below are some of the hilarious questions, deep though humor and funny thoughts.

Where is the cat in the catwalk?
Do models walk like cats?

Why are apartments so close together?

What idiot put an ‘s’ in the word lisp?

If man evolved from apes, why do we still have apes?

Why do they call it a TV set when you only get one?

If an orange is orange, why isn’t a lime called a green or a lemon called a yellow?

If horrific means to make horrible, does terrific mean to make
terrible? 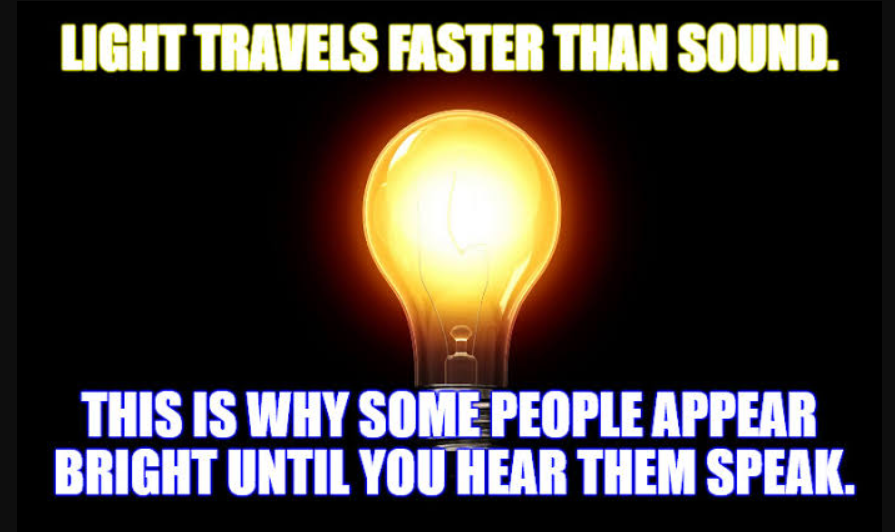 If you had amnesia and then were cured, would you remember that you forgot?
Why isn’t 11 pronounced ontey one?

Why is the word abbreviation so long?

Is it true that cannibals won’t eat clowns because they taste funny?
Do hyenas laugh even when they are being killed?

Why are a wise man and a wise guy opposites?

You know when you are driving, and you notice one shoe on the road… whatever happened to the other shoe?

Why do we press harder on remote control buttons when we know the battery is dead?
Why do overlook and oversee mean opposite things?

When you have your picture taken with Mickey Mouse at Disneyland, does the guy inside the costume smile for the camera?
“I am” is reportedly the shortest sentence in the English language.
Could it be that “I do” is the longest sentence?
Why is it that if someone tells you that there are 1 billion stars in
the universe you will believe them but if they tell you a wall has
wet paint, you will have to touch it to be sure?
How much deeper would oceans be if sponges didn’t live there?

What happens if you get scared half to death twice?

If Barbie is so popular, why do you have to buy her friends?

If a member of a synchronized swimming team drowns, do the rest also drown?
If it’s true that we are here to help others, then what exactly are the others here for?
No one ever says, “It’s only a game,” when their team is winning.
Ever wonder what the speed of lightning would be if it didn’t zigzag?
If a cow laughed, would milk come out her nose?

Why do skydivers wear helmets?

After eating, do amphibians have to wait one hour before getting out of the water?
How can there be self-help groups?
If someone has a mid-life crisis while playing hide and seek, does he automatically lose because he can’t find himself?
If someone with multiple personalities threatens to kill himself, is it considered a hostage situation?
Instead of talking to your plants, if you yelled at them, would they still grow, but only to be troubled and insecure?
Is there another word for synonym?
Isn’t it a bit unnerving that doctors call what they do “practice”?
When sign-makers go on strike, is anything written on their picket signs?
When your pet bird sees you reading the newspaper, does he wonder why you’re just sitting there, staring at carpeting?
Where do forest rangers go to “get away from it all”?
Why do they report power outages on TV?
Why are builders afraid to have a 13th floor but book publishers aren’t afraid to have a Chapter 11?

Do you need a silencer if you are going to shoot a mime?

How does the VCR clock work anyway?

How does the guy who drives the snowplow get to work in the mornings?

How many times do you use a disposable razor?

Why do banks charge you an ‘insufficient funds’ fee for money they already know you don’t have?

If a cow laughed, would milk come out of his nose?

If nothing ever sticks to TEFLON, how do they make TEFLON stick to the frying pan?

If our knees bent the other way, what would a chair look like?

If you are refinishing a table, shouldn’t you have to restart?

If you are cross-eyed and dyslexic at the same time, would you see okay?

If your in a vehicle going the speed of light, what happens when you turn the headlights on?

When a crash-test-dummy hits his head, and no engineers record the results, does he make a sound?

When it rains, the sky is completely covered in clouds. How does the rain get through?

Where can you buy those little plastic ends to put on your shoelaces?

Why are there floatation device under plane seats instead of parachutes?

Why do they put Braille dots on the keypad of the drive up ATM?

Why do we drive on parkways and park on driveways?

Why does sour cream have a use-by date?

Why does the doorbell ring just after you’ve stepped out of the shower?

Why is there always one in every crowd? If you took all the ones in every crowd and put them in another crowd, will there be one in that crowd?

Why isn’t phonetic spelled the way it sounds?

Why do we tend to raise our shoulders when we’re out in the rain?

Why is it that when You’re driving and looking for an address, You turn down the volume of the radio?

Why is it that you see this written on car seat belts:? This seat belt does not offer any protection if it is not buckled up?

Why is it that international magazines that advertise products will have the same description of something in different languages, but the description of each language is written in English? Who’s that supposed to benefit?

Why do they print “serving suggestion” next to the picture of a product on its label?

Why do they print warning labels telling you not to eat poisonous substances when there isn’t a “serving suggestion” on the label?

If you throw a cat out a car window, does it become kitty litter?

If corn oil comes from corn, where does baby oil come from?

Why do they put Braille on the number pads of drive-through bank machines?

How did a fool and his money get together?

How do they get a deer to cross at the yellow road sign?

Why do kamikaze pilots wear helmets?

How do you know when it is time to tune your bagpipes?

What was the best thing before sliced bread?

How come Superman could stop bullets with his chest, but always ducked when someone threw a gun at him?

How much deeper would the ocean be if sponges didn’t grow in it?

Why buy a product that it takes 2000 flushes to get rid of?

Why do we wait until a pig is dead to “cure” it?

Why do we wash bath towels? Aren’t we clean when we use them?

Why doesn’t glue stick to the inside of the bottle?

What is the speed of dark?

How come you never hear about gruntled employees?

What is a “free” gift? Aren’t all gifts free?

How can there be self-help groups?

Why do we play in recitals and recite in plays?

Are there seeing eye humans for blind dogs?

When you open a new bag of cotton balls, are you supposed to throw the top one away?

When your pet bird sees you reading the newspaper, does he wonder why you’re just sitting there, staring at carpeting?

Whenever I think of the past, it brings back so many memories…

How much deeper would the ocean be if sponges didn’t live there?

Did Washington just flash a quarter for his ID?

I just got skylights put in my place. The people who live above me are furious.

I live on a one-way dead-end street. Makes sense?

It doesn’t matter what temperature a room is, it’s always room temperature.

Why in a country of free speech, are there phone bills?

What would happen if there were no hypothetical questions?