Arranging party for some special occasion and looking for the fun-filled best party game ideas that you can play during the party? We have enlisted here 30+ fun party games that will keep everyone engaged. 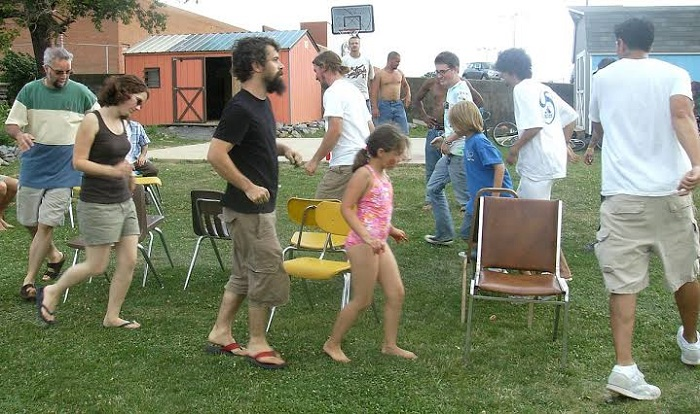 Line up alternate facing chairs, one less than the number of children playing.( Eg. If there are 10 players, place 9 chairs). The players move round the chairs while the music is on.

When the music stops they have to sit down on a free chair. The player without a chair is out, take away one chair each time.

Repeat until you have only 2 players and 1 chair. The one to sit down first on the last chair is the winner.

Put a ping-pong or table tennis ball on the edge of a table. A player is blindfolded. He/she stands with his/her back to the table. At the command he/she makes 5 steps forwards, turns around 3 times, comes back to the table and tries to blows the ball off the table.

It’s really funny to watch when the players blow the ball off the place the ball has never been.

Put small toys on the floor. As the music plays everyone walks around the circle, following the leader. When the music stops everyone must grab a toy. The person who hasn’t picked a toy is out. The number of toys should be reduced every time. The winner is the person who stays till the end of the play.

This is similar to  musical chairs but played with pieces of paper placed on the floor. But remember to place one less piece of paper to the number of players. ( Eg. If there are 10 players, place 9 pieces of paper)

When the music stops the children have to stand on a piece of paper. The player not standing on a desert island is out.

Always have one less desert island than players. The paper (islands) should be  colourful and not too small.

The balloon is tied to the left leg of players. The object of the game is to burst a rival’s balloon with the right leg. Do not play this game with small children.

WHOSE SHADOW IS THIS ?

Put a white sheet on the wall. One of the players sits down on the chair facing the sheet. At the opposite side of the room there is a lamp on a table. All the players walk between the lamp and the guesser in turn. The guesser must try to identify the others by their shadows as they walk past. The players try to change their shadows. The player who is recognized becomes the guesser.

Have a list of things for the players to do e.g. walk, run, sit down, hop on left foot, wave your right hand, quiet, noisy, stand still, jump up and down, scream, dance etc.

The game is to do the exact opposite to what you are saying.

Gradually remove all those players who get it wrong,

The last player remaining is the winner

This can be played either as a team game or for individual players.

Cut out pictures from old magazines.

Cut or tear into smaller pieces to form a jigsaw pattern.

Put each into a separate box or bag .The team or player that completes the picture correctly first is the winner.

All the players have to run, jump, skip, hop,dance etc. while the music plays,

The last one to sit down is out. Continue the music until you have a winner.

Collect about 10 boxes before for party, eg shoe box size, cut a hole in the top big enough to put your hand in, cover the boxes label or number them so you know which is which. place a different object in each box.

Blindfold all players, get them to put their hand in the box one by one and guess what they are feeling

You can further use your imagination and The list can be endless but don’t go for anything too messy.

Paint or decorate the hoops and the empty bottles,

3 hoops for each player. Put 3 bottles on the floor, and

mark a throwing line on the floor with chalk or stick tape.

Each player takes turns to throw the hoops onto the bottles the one with the highest score is the winner.

In case of tie, a re-match between the players decides the winner.

All the players have to run around while the music is playing,

When the music stops, the children have to stand as still as a statue for as long as the music is not playing.

The first child who moves is out, repeat until you have a winner.

Each player must run a certain distance, holding a spoon with a big potato on. The players run in turn. If the potato falls down, the player must put it in the spoon again and continue to run. To run without a potato in the spoon means to break the rules. The player who covered the distance in the shortest time is the winner. Instead of a potato you can even try a lemon.

On cardboard draw or paint a simple dart board with rings and points.

Give each player 3 balls made from plastacine, put a tape on the floor for the throwing line or draw the line with chalk.

The players take turns throwing to the dart board, aiming for the centre ( Bulls eye)

The player with the highest score is the winner.

One player is the wolf. The Wolf has to stand at one end of the room facing away from all the others. The children creep up on the wolf shouting “what’s the time Mr Wolf?”

Mr Wolf shouts back 2 o’clock, half past 4, 6 o’clock etc. but when he shouts “dinner time” all the children run. The one caught then becomes the wolf, and the game goes on this way

Played with music, all the players move round while the music is going on, when the music stops the players have to stand like statues, anyone who moves is out, start the music again and repeat as many times as you want. The last one is the winner.

One person plays the cat, the others stand in a circle around the cat, the cat puts their hands over their eyes and repeats “three blind mice, see how they run” as many times as they wish. When they stop and say “see how they run NOW” The mice run away and the cat tries to catch them, the one to be caught then becomes the cat & the game goes on this way.

Such games brings the numerous health benefits as it involves running . Running can help your child to increase stamina and at the same time build bonding with other friends.

Don’t forget to gift a pair of the running shoes to kids so that can stay motivated. Sport shoe will help to maintain the arch of foot and will provide the required foot support which will prevent foot injuries that are caused by the micro-tears in plantar fascia and inflammation of foot tendon helping prevention of the foot tendonitis

Passing the parcel round to music, when the music stops the child with the parcel takes off a layer of paper, the child who takes off the last layer gets to keep the prize.

Make sure you have enough layers so everyone gets to take off a layer of paper: put sweets or small prizes in-between the layers so you don’t have any tears or sad faces.

Pinning the tail of the donkey

Draw a picture of the back of a donkey without the tail on a big piece of paper or cardboard draw on a big “x” where the tail should be, and paint a separate tail that will be pinned.

Each guest is blindfolded in turn and lead to the donkey, spin them round 3 times near the picture, then they have to “pin the tail to the donkey”.

The one who has put their tail closest to the “x” is the winner. Either make different tails for each guest or mark the spot with the players name.

Call the teams different names eg 1 and 2 or apples and lemons.

Play music, after a time switch off the music, shout out one team name, that team has to make the other team laugh, smile or move any part of their face etc, the players that are not “poker faces” are counted as1 point each, the team with the lowest score at the end of the game are the winners. Repeat as many times as you want the game to last. Alternating the team names shouted out.

Round the Mulberry Bush

Mum or helper says “Simon says” hop on one foot, clap your hands, run round in circles, stand still, jump up and down,laugh out loudly, etc, the list can be endless. You can play this game so many different ways eliminate anyone who is slow to react, so you end up with just one winner. Stay on one theme e.g. making the sounds of animals, doing the actions of animals e.g. elephants, monkeys, birds etc.  Or keep everyone “in” and do not eliminate anyone. This will keep everyone happy 🙂

Divide the players into 2 teams. Tie a ribbon or hanky on the middle of the rope. Put 2 lines on the ground so the players stand behind the lines, pick up the rope and on the word GO the team that pulls the other team over their line is the winner.

You must pass 10-20 meters long with the book on your head, having a glass full of water in your left hand and another book in the right hand. At the same time you must roll a ball with your feet. The fastest is the winner.